Rationing Our Finite Resources… with Our Eyes Open 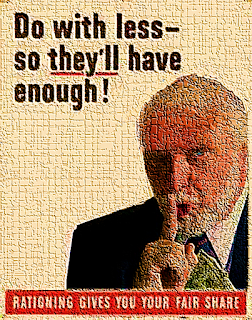 Two articles published in the latest NEJM issue are devoted to “our finite resources” and the inevitability of rationing care. First Dr. Howard Brody is attempting to rephrase the issue as one of “waste avoidance” and is delving into the ethics of practicing waste avoidance which is defined as withholding non-beneficial care. Of course non beneficial is not a cut and dry label, so Dr. Brody is envisioning that “[a]n ethical system for eliminating waste will include a robust appeals process”, where “[p]hysicians, as loyal patient advocates, must invoke the process when (according to their best clinical judgment) a particular patient would benefit from an intervention even if the average patient won't”. While the sentiment is commendable, I am not clear who exactly should physicians appeal to “according to their best clinical judgment” and I am not certain where the newly empowered and engaged patient go. Or is all this empowerment and engagement talk just a cruel joke?

The second article in NEJM, which is authored by M. Gregg Bloche, M.D., J.D. and titled “Beyond the “R Word”? Medicine's New Frugality”, is arguing that it is very unlikely that we could actually cut the waste, which is estimated at 30% of costs, and even if we do, costs will continue to rise and we are just postponing the inevitable. The inevitable, in the kind doctor’s opinion, is denying beneficial care. No beating around the bush any longer. Just say it and do it. Of course, the empowered patients are nowhere to be found in this article either, although it is full of advice for politicians on how to go about stopping therapeutic advances in their tracks, because “we can't afford all the things that medicine can achieve” and “we must make painful choices between health care and other needs”. Sadly Dr. Bloche J.D. did not elaborate on his “other needs”.

But the most disturbing experience for me was reading the comments posted to both articles, mostly by physicians, and mostly supportive of the need to ration care to patients. One physician commenter in particular seemed to see rationing as “a logical corollary of our responsibilities as physicians” because physicians are citizens before they become physicians and they have duties and responsibilities to their fellow citizens which “are not superceded [sic] by the mythical primacy of the doctor-patient relationship”.
Well, if we must ration our finite resources, let’s ration them with our eyes open, as Dr. Berwick wisely stated. So here is some eye opening material for your rationing pleasure….
**********************

“Millions of dollars have been spent transforming the hospital into a beautiful, soothing, healing environment. Artwork graces the walls and soft music fills the hallways. ……..
“Hospital food” is also out-of-the-ordinary at Fauquier Health; The Bistro on the Hill provides food options for patients and their guests. Earning a reputation of its own in Warrenton, the Bistro serves everything from brick-oven pizza to gourmet pasta, from a fresh soup and salad bar to shrimp stir-fry. Bakers keep the dessert case filled with fresh cakes and pies, cookies and tarts. Community groups frequently congregate at The Bistro, and catering for off-site events is available.” http://www.fauquierhealth.org/about-us

“A six-story pavilion is under construction on the west side of Missouri Baptist Medical Center. The patient tower is part of a major building project that also will see construction of a new Clinical Learning Institute, new entry way, parking lot and nature trails for the campus at 3015 N. Ballas Road. The West Pavilion will add 216,000 square feet to the medical center and will house the medical center's new main entrance lobby; four floors of private patient rooms for surgical patients; four new operating rooms; and a new outpatient surgery center that will connect to the hospital's current operating room suites. "Medicine has changed a lot since 1965 (when Missouri Baptist relocated to its present location), when patient rooms were smaller and they still actually had patient wards," said Jesse Arevallo, facility and campus planning director. "The new standard of care requires a larger building footprint," he said. "This project, creating state-of-the art equipment and facilities, will tremendously benefit patients and the community." The private hospital rooms will allow the medical center to find a new use for its semi-private rooms in the main part of the hospital. "So we're not actually adding beds, but replacing," Arevallo said. The West Pavilion will cost $140 million. It is slated for completion by July 2013.” http://www.stltoday.com/suburban-journals/metro/news/missouri-baptist-medical-center-to-add-six-story-patient-tower/article_7efd4ea4-fdcd-538d-abc5-cbc464d531f6.html

“Patient-centered amenities abound in the new Cancer Center facility
As patients and families enter the lobby of the Cancer Center facility, they will step into a cozy, living room-style space with fireplace, sofas, chairs and decorative carpeting. A nearby café will offer indoor and outdoor seating and a health-focused menu with fruits and vegetables from local farmers. ……  A focal point of the building is a central, five-story, light-filled atrium, which looks down on spiraling artwork filled with inspirational quotes from Duke cancer patients and friends.” http://construction.dukemedicine.org/projects 20

**********************
Following Dr. Brody’s reasoning, I can certainly see some golden opportunities here for ethical waste avoidance, with a proper appeals process in place, of course. And as painful as it may be, some of the beneficial ambiance provided by fireplaces, freshly baked brioche and well-fed executives will need to be cut as well, because Dr. Bloche is largely correct and we do have other needs, which could be addressed by having corporations, whose cash flows allow for millions of dollars in real estate investments and executive compensation, pay their taxes first.

If you think that this is a liberal overreaction to a couple of academic papers, think again. In the January 2010 issue of NEJM, Dr. Brody suggested that each specialty should pick a “Top Five” list of expensive tests and treatments that should be discouraged. Today we have the ABIM Choosing Wisely campaign of exactly five “don’ts” for each specialty. What I find fascinating is that routine EKGs, for example, are discouraged twice in the ABIM lists, but places like the top ranked Mount Sinai hospital seem to think that having those routine EKGs and much more is a very good idea (if you have $6,000) and will “help you and your associates live longer, healthier lives through the highest measures of preventive care”. So is Mount Sinai with its “award-winning physicians” correct? Or is ABIM correct? Or do we advocate two standards of care based on the size of your wallet?

As to Dr. Bloche J.D., his Huffington Post bio, suggests that amongst his many degrees and honors he “was a health care advisor to President Obama’s 2008 campaign, as well as the presidential transition, and he spoke frequently for the campaign as a “surrogate.””.  Is he speaking as a “surrogate” (whatever that may be) when suggesting that we must ration beneficial care (Mount Sinai executive customers excluded, of course)?

I don’t have the answers to these questions, but the implications to non-policy makers are pretty clear. To all the ePatients, participatory patients, engaged and empowered patients out there, I would suggest that you devote as much time to budding policies as you do to obtaining access to your electronic data, because having real time visibility into how your care is being denied will provide very little comfort, even if it is supplied to you in a computable and transferable structured data format.
To all practicing doctors, if you passively allow yourselves to be represented by learned articles like the ones cited here because you are too busy seeing patients, the day will come when, in the eyes of the public,  your profession will be no different than that of an IRS auditor, including financial and social rewards. Yes, you will most likely retire by then, but this is the Medicine you are going to experience in your old age, and this is the Medicine you are bequeathing to your children and grandchildren, and this is not the Medicine that was entrusted to you by previous generations of physicians.
Facebook Twitter Telegram