Is Abortion Good or Evil? 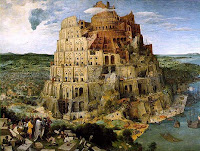 Genesis 11:1-9 New Revised Standard Version (NRSV) 1: Now the whole earth had one language and the same words. 2: And as they migrated from the east, they came upon a plain in the land of Shinar and settled there. 3: And they said to one another, “Come, let us make bricks, and burn them thoroughly.” And they had brick for stone, and bitumen for mortar. 4: Then they said, “Come, let us build ourselves a city, and a tower with its top in the heavens, and let us make a name for ourselves; otherwise we shall be scattered abroad upon the face of the whole earth.” 5: The LORD came down to see the city and the tower, which mortals had built. 6: And the LORD said, “Look, they are one people, and they have all one language; and this is only the beginning of what they will do; nothing that they propose to do will now be impossible for them. 7: Come, let us go down, and confuse their language there, so that they will not understand one another’s speech.” 8: So the LORD scattered them abroad from there over the face of all the earth, and they left off building the city. 9: Therefore it was called Babel, because there the LORD confused the language of all the earth; and from there the LORD scattered them abroad over the face of all the earth.

There was a time in America when we were one people. There was a time when nothing we proposed to do seemed impossible. Our communal tower touched heaven and we certainly made a name for ourselves. Since then, a different type of Lord, similarly threatened by our success, has confused our language in a new and more insidious manner to the point where we no longer understand each other’s speech, and a frustrated populace gave up on trying, reverting to primate screeching and screaming instead. It is painful to watch, and it is agonizing to participate in the decaying remnants of our once glorious public discourse.

This is not about who says tomato and who says tomahto. The modern confusion occurs when I say tomato and you hear cucumber. There is no way for us to cook some spaghetti sauce for dinner with my tomato, or tzatziki with your cucumber. I don’t understand why I should chop some dill for the sauce when basil and oregano are the obvious choices, and you have no idea why I’m trying to boil a big pot of water instead of grabbing that Greek yogurt container from the fridge. Salt and garlic are the only things we can agree on, although in vastly different amounts, but nobody can survive on salted garlic. And so, we end up yelling at each other, and eventually we both go to bed angry, exhausted and hungry, each one of us convinced the other one is a hateful idiot and a traitorous saboteur of dinners. The Lord has prevailed.

Today, when I say Socialism, I see a democratic nation with a generous welfare system and thriving private economy, like Sweden or Denmark. You see Cuba or Venezuela, with millions starving in the streets while murderous, mustached dictators are wallowing in palatial riches. When I say Capitalism, I see hundreds of thousands of businesses innovating and competing to serve their customers while creating a land of plenty for all. You see racist, bigoted, exploitative tyranny of a few billionaire owned corporations, employing slave labor tactics to enrich themselves further while the rest of us starve to death. And that’s where the conversation ends, and the yelling commences. There can be no further discussion, no objective analysis, no learning and certainly no compromise. From both our perspectives, this is a fight between Good and Evil. You don’t discuss things, let alone compromise, with Evil.

Now let’s discuss abortion, which is perhaps the ultimate example of how fake language acts as a paralyzing venom in service of our predators. If you listen to the public debate now raging on social media and all other media, you would surmise that the battle lines are drawn between two distinct camps. The “pro-choice” camp stating that abortion is Good, without any caveats, and the “pro-life” camp which insists that terminating a pregnancy is Evil, again with no caveats. If you propose to restrict abortion in some cases, you are enslaving women. If you suggest allowing some abortions in special circumstances, you are a baby killer. Both pro-choice and pro-life terms were carefully selected to make polite debate impossible. You cannot be anti-choice or anti-life without being Evil. There is no terminology for anything in between. Oh sure, you can launch into a tirade, but nobody will listen to Evil.

Fake language creates fake realities. Few if any Americans are absolutist pro-life or pro-choice. There is a spectrum of opinions and feelings that was rendered all but inaudible once the screeching, screaming and yelling has begun. Recent polls (grossly tilted towards non-religious people) show that while most Americans label themselves pro-life or pro-choice, only 27% (at most, and likely a lot less) are firmly entrenched at the ends of the spectrum. The remaining vast majority is somehow rendered irrelevant in the current shouting match. If you want to stay relevant in this circus, we call public debate, or rather electioneering politics, you must recite the precise words of the gospel. And when opposing gospel reciters meet, this is what Babel sounds like:

Pro-death: Government has no business telling women what to do with their bodies. My body, my choice. Male members of the old white patriarchy have no say in this debate anyway, because they don’t have a uterus. Besides, the Supreme Court decided this already and we have a constitutional right to abortion.

Pro-coercion: The Supreme Court decision was wrong and must be overturned. Abortion is murder. Plain and simple. You don’t have a right to murder other persons, even if they were not born yet. Killing a baby in the eighth or ninth month of pregnancy, by tearing her to pieces in the womb, and finishing the job after birth if she survives, is infanticide. Is that okay with you?

Pro-death: Do you seriously want to prosecute and jail a twelve years old girl who was raped by her uncle and got pregnant? Do you want to force little girls to carry babies? Those late abortions don’t really happen, except in extreme cases to save the woman’s life. It’s a far-right myth. You’re watching too much Fox News.  So that’s a straw man, but sure go ahead, I’m sure you don’t care if women die and children are jailed.

Pro-coercion: Oh yeah, you go ahead, lecture me about caring for children, while you massacre hundreds and thousands of babies every year. And if that wasn’t enough, now I’m supposed to finance your Commie holocaust. F*** off….

Pro-death: You’re the biggest hypocrite I’ve ever met, and a liar too. If you care so much for children, how come you refuse to fund public education and early childhood programs? How come you keep sending so many black boys to prison? You’re just a racist Trumpkin, in addition to clearly being a rabid misogynist, and I bet you love putting immigrant children in cages too. You can f*** off yourself… Idiot…

And on and on it goes. Note that both sides put forward reductio ad absurdum arguments, while responding solely with tangentially related ad hominem attacks on their interlocutor. Why is that? Well, maybe it’s because nobody in their right mind can defend imprisoning twelve-year-old rape victims, just like nobody in their right mind can defend terminating a perfectly good baby five minutes before it is due to be born. It is disheartening, but it is also a good sign that we haven’t gone completely mad just yet. Another thing to notice is that on both sides people are either not fully aware of simple facts or would much rather conduct this Babylonian conversation on a fact-free emotional level.

Did you know, for example, that when the Roe v. Wade decision was issued, plenty of progressive voices found it poorly reasoned and even counterproductive? None other than Justice Ruth Bader Ginsburg is on the record saying that “the Court ventured too far in the change it ordered and presented an incomplete justification for its action”. Now make no mistake, RBG is staunchly pro-choice, but the Court may have done more harm than good here, by impatiently stepping out of the judicial lane and into the legislative one, at a time when progress was slowly but surely being made in various States.

Did you know that in Roe the Court asserted that a woman’s right to an abortion is “fundamental”, but only for the first three months of a pregnancy and only in consultation with a physician? After that the State has its own rights to intervene with or outright deny this fundamental right, due to competing interests. Later, in Planned Parenthood v. Casey, the court discarded the medically outdated trimester framework and introduced a dynamic “viability” concept, bolstering the power of States to interfere with a woman’s fundamental right to an abortion, as long as no “undue burden” is imposed on the woman. Neither Roe nor Casey are giving women full rights to terminate a pregnancy whenever and however they see fit. Both Roe and Casey grant States the right to curtail reproductive autonomy of women, if they so choose.

In 1973 the Court decided Roe with a clear 7 to 2 majority. Ten years later, in Casey, the Court splintered into multiple plurality opinions with only one narrow 5 to 4 majority decision to uphold Roe with adjustments in favor of the States. I can’t even begin to guess how the lines will be drawn if an abortion case comes before the Court today. We share this country with one third of a billion other people. Societal consensus on important issues is rare, difficult, and takes decades if not centuries of patient and serious discourse to build. That’s why we have fifty States. We either relearn how to meaningfully communicate and compromise with each other or we will perish in most unnecessary and painful ways.
Facebook Twitter Telegram